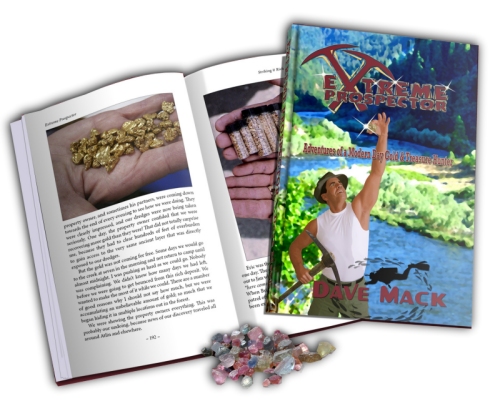 Herb Clark: Dave: You certainly have a way with words. Most of the book had paragraphs so vivid I was feeling the pain and fear you were experiencing and I was sitting in my recliner chair reading your book! This is a great book and I enjoyed all of your adventures immensely. I felt like I was right there.

Russ Chipman: I received the hardcover version of Dave’s Extreme Prospector. It is a comfortable book to hold because it is small but thick, measuring 8 1/2″ X 5 3/4″ and 512 pages. The book looks good because the outside covers are full of color, especially the back cover where there is a hand, maybe Dave’s hand, holding a handful of beautiful gold nuggets.

My favorite chapter so far is, “Hunting with the Jungle Dwellers of Borneo.” They were hunting wild pigs with a spears, and Dave found himself alone in the jungle. Page 468: “About thirty yards away, at a full run, he spotted me. I was an easy target. So he aimed himself directly at me, snarling, spitting and squealing in a killer rage. My strongest inner voice was screaming at me to turn around and run for my life. That’s my internal coward trigger. I overrode the urge, held the spear tightly, and pointed it directly at the boar as he came at me. He was coming fast. It was difficult to target the exact kill zone behind the shoulder because he was moving so quickly. I decided I might be better off just to make sure I hit him anywhere with the point of the spear. That way, maybe I could use the spear to hold him off. As he ran right at me, I aimed the best I could and got him in the hindquarter. Bad shot. This caused him to scream bloody murder. I held him off while he was goring at me with his tusks and snapping jaws……”

Great book! Lots of pictures and easy to read.

Mike Higbee: Luckily I was in Bangkok the same time as Dave and was able to obtain a copy of the new book. All I can say is “WOW”. I typically am not much on reading books except technical articles. I started reading Extreme Prospector and couldn’t put it down for almost 138 pages and then I had to stop for food. Informative, insightful, and entertaining all in one. GREAT job Dave…thanks!

Anna Brentwood: Dave is the genuine article and a true adventurer! He gives the reader a detailed and rare glimpse of what it is like to live life on the edge and he bares his soul to share his wisdom–much of it gained the hard way. His writing style grabs you right away and he doesn’t spare himself or others with his honest take on people, places or situations. His ethics, morality and dedication show through and this book is a MUST READ for anyone who loves guts and glory or just wants to experience adventure from their recliner. His book is full of information for anyone wanting to know more about mining, but even if you aren’t a miner, you will want to read this story for the sheer thrill of it.

Scott McCluskey: Dave McCracken has done more to properly train a whole generation of Extreme Prospectors than anyone I know. His witty writing style and incredible detail will have you on the edge of your seat as he takes you through unbelievable adventures in the jungles of the Amazon, Borneo, Sumatra, Burma to name but a few, reminiscent of Indiana Jones himself.

I absolutely loved this book as well as his past training manuals, all of which I own as an Extreme Prospector myself living here in gold country in British Columbia Canada. In fact one of the funniest and thrilling stories were of Dave’s early days on a road trip to Alaska that had him and his brothers recovering buckets of gold nuggets in Northern B.C. and running from the authorities in a well planned exit strategy engineered by this once upon a time Navy Seal.

If you have a love of Indian Jones style adventure in the pursuit of gold and precious stones you will love this book!

Wes: The author relives his glory days as a Navy Seal, where he learned his diving skills. These skills led him to be a underwater prospector, who has traveled the world in search of the yellow metal. The author writes about his most memorable adventures as a gold dredger ( underwater prospector)which will keep the reader on the edge of their seat as each adventure is told in a way that makes you think you are with him on the prospecting adventure. Well worth the money.

Amy: I bought this book for my husband who has been reading and loving it. Dave Mack has been his hero for 20 years. This book has helped shed light into who Dave really is and where he comes from. Dave is an inspiration for real men everywhere.

Great book and he should be proud.

Scraprock: Dave must be getting cold from being so naked as he basically bared all in this revealing , informative and highly entertaining book. Some of his stories are very personal. Being an extreme prospector takes a lot of guts, but so does going public with some of the very private parts of his life. I really thought this book was great !!! In a couple chapters he diverged from his adventures to share some keen insights about the times we live in. It’s a hard-hitting account of Americas path to decline and how we can stop it, reverse it, and get things headed up again. Everything he says is true. I hope a million people read it and at least half heed the warning. The writings not only on the wall, now it’s in this book. Great adventure, Highly informative.

Bill Rakozy: Today is October 27th, 2012. I’m sitting in a small one-man tent while encamped in the high-desert, gold-rich foot-hills of Randsburg, CA, reading Extreme Prospector by Dave Mack. It’s 4:30am. The temperature is forty-one degrees, my nose is running, fingers are cold and stiff as I press the keys on my MacBook Pro.

It’s pitch-black outside here in the high Mojave desert. Once again, I’m reminded that it’s much easier to read about finding gold or treasure while comfortably sitting in your living room, than it is to actually get outside and make it happen in the outdoor elements!

I have personally met Dave Mack but I didn’t realize what an incredible life this man has led and continues to lead as the founder of “The New 49ers” gold prospecting group which is based in Happy Camp, CA. He has traveled the world, dealing with dangerous and life-threatening situations, looking for gold, jewels and treasure. Underwater dredging for gold is his expertise.

With the future of the U.S. economy in question and the value of the dollar declining by the day, adventurous men and women all across the USA and others worldwide, are drawn to the potential of discovering gold which continues to steadily increase in value. Using modern gold recovery equipment and metal detectors, we’re placing our economic future into our own hands, one shovel-full at a time.

Extreme Prospector isn’t just another gold mining tutorial. It’s a true to life tale of a man’s fight against the influences of an abusive father; shaping of his character by the Navy SEAL team training course; A testament to what can happen when fear is overcome and you never quit no matter what. Personally, I found it very inspiring.

I just heard the first bird of the still desert morning. Time to heat the cast iron pan for bacon and eggs and perk a fresh pot of coffee. Today is filled with the expectancy! Seek and you shall find. If you’re seeking a great book, read Extreme Prospector, by Dave Mack. I give it a strong 5-Star rating! Almost as good as gold itself!

Raymond Perry: Hey Dave Mack: I just finished reading all of your book. I said the other day it was awesome. Maybe I should have said its a super great book. I enjoyed reading all your adventure stories. Your view about our government is right on. Americans need to stand up together and demand that we restart our economic engines!

James Young: I recently purchased your book, Extreme Prospector. I read it with much enjoyment. However, I have to say that the last chapter is worth the price of the book all by itself. I am 65 years old and have never heard the analysis of the situation that American now finds itself in put quite so honestly and bluntly, especially by any of our elected “leaders.” You managed to condense most of the things that I knew, and a few that I didn’t, into that one chapter that says it all. You put it out there about as plain and simple as could possibly be done. My compliments. I know that your answer to my next statement would be an outright refusal but, “You should run for office!!!”

You probably would not get elected in today’s political and social environment but the impact of your message would definitely some heads spin.

Anyway, just had to make a comment about that last chapter and let you know that I agree with you 110%.

Best of luck and congratulations on the the book!

Also Available in Paperback or Kindle e-book from Amazon

Dave Mack and some of his adventure buddies race to find untold riches in diamonds before the monsoons arrive in India!

Watch all 5 Episodes Below: